DR. GEORGE R. COGAR Biographical Data March, 1975
Dr. Cogar began his business career in 1964 as one of the co-founders of Mohawk Data Sciences. He served as a Director and as Vice-President of Engineering.
In 1967 Dr. Cogar resigned his position with MDS to pursue interests in venture capital investments and simultaneously worked as a private con-sultant to a small number of major U.S. Data Processing Companies. He was one of the financial founders of Data General Corporation and served during the corporation’s first year as Chairman of the Board of Directors. Dr. Cogar was elected a Director of Computel Systems Ltd in 1968, serving for a period of three years, including one year as Chairman of the Board and Chief Executive Officer.
In 1967 founded Cogar Corporation and has served continuously from its
founding until the present, as President and Chief Executive Officer.
Dr. Cogar has a world reputation for his technical contributions to the Data Processing Industry. From 1955 to 1958 and 1959 to 1964, he was employed by Univac as a Systems Designer and Systems Architect. He was a principal contributor to the development of the UNIVAC II, LARC and a

-2-
number of related peripheral systems. As project manager for the logics design of the UNIVAC III, he developed the industry’s first high density tape system. He was the principal architect and program manager for the UNIVAC 1004, including its adaptation as a peripheral processor and commu-nications terminal for the UNIVAC 490 and UNIVAC 1107. Additionally, at UNIVAC, he served as Divisional Staff Scientist for Systems Architecture.
During 1958 and 1959 was employed by Philco Corporation as Principal
Engineer for Magnetic Tape Systems for the Philco 2000.
Dr. Cogar holds numerous patents relating to systems architecture, logic
designs, electronic circuits, fluidics and mechanical systems.
Honorary Doctor of Science from West Virginia Wesleyan College.
Founder, benefactor and member of Cogar Foundation, a “not-for-profit” corporation financing studies of potential sociological impacts of rapidly evolving technologies. Trustee of Hamilton College. Council Member, Upper Division College Utica-Rome, State University of New York.

-3-
Hobbies include photography, public speaking, cabinet making and wild life sports. Has been engaged for the past six years in developing a major wild life sanctuary (several thousand acres) in Herkimer County, New York.
Addenda – Dr. Cogar is married to the former Ann Bowyer of Coal City, West Virginia. They have three children – Cassandra, Cheryllyn and Cecil Clay II, aged 20, 17, 14.
Born in Gassaway, West Virginia in 1932. Dropped out of primary school after tenth year to join USAF, serving 4 years as Radar, Radio and Weather Equipment Specialist. Self-employed in Radio and Television Repair followed by a short period as an Instructor for the Army Signal School prior to joining UNIVAC in 1955. 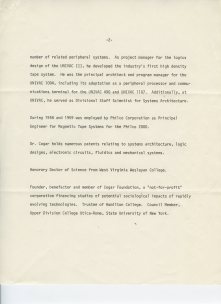